But, see below (Page in test mode)!

A new workshop "Control Science of Autonomous Systems" was started in April 2017 and is held regularly thereafter (http://www.ipu.ru/smart). It is devoted to a rapidly developing scientific direction in the world where the Institute of Control Sciences must find and take its place. We achieve certain results in this area and we intend to continue research in this direction. We are open to cooperation with researchers from other scientific organizations and industry...

2. Lev Rapoport, Precise satellite navigation and its application in agriculture.

4. Yuri Morozov, Emergency control of the quadrocopter in case of failure of 2 symmetrical screws.

7. Aleksei Rozhnov, On the System Integration of Research Directions...

8. Valery Bimakov, Application of voxel hardware and software processing of scenes to increase the adaptability of autonomous mobile robots.

10. Andrey Shevlyakov, Modeling and control of robots in the form of a cube.

11. Aleksei Rozhnov, On the definition of "artificial intelligence" with specification of technical and legal norms and "autonomy" in a functional aspect (in continuation of the discussion on item 9).

16. Sergey Branishtov, Modeling the movement of mobile agents in the congestion (…).

20. Alexander Melikhov, Review of current patents on methods and tools of computer linguistics.

22. A. V. Abdulov, A. N. Abramenkov, V. M. Borodulya, A. A. Shevlyakov, On the successful experience of the participation of the team of the IСS RAS in the open competition of the Foundation for Advanced Studies.

23. Artem Vishnevsky, On the secure processing of confidential information based on completely homomorphic encryption.

24. Aleksei Rozhnov and others, On summarizing the work of the seminar for the 2017 year.

back to table of contents

27. Vadim Makarov, Analysis of the capabilities of UAVs to perform flight missions.

28. Andrey Polokhov, Algorithmic method of correction of the readings of the GLONASS / NAVSTAR sensor system, located in a special way on the surface of the aircraft.

31. Nguyen Duy Fuong (SRV), Analysis of the trends in the development of telecommunication technologies, communication and control systems based on unmanned aerial vehicles.

33. Konstantin Yakovlev, Methods and algorithms for centralized planning of a set of non-conflicting trajectories for a group of intelligent agents (mobile robots).

34. «'s Approaches to the Elaboration of a Working Definition and Basic Functions of Lethal Autonomous Weapons Systems in the Context of the Purposes and Objectives of the Convention» [CCW/GGE.1/2018/WP.6].

Content duplication date: 2018.06.18. The actual information is placed starting, first of all, from the main page of our seminar in Russian (always in priority).  — URL: http://www.ipu.ru/smart.

back to table of contents

Newsletter dedicated exclusively to efforts to prevent the development and use of lethal autonomous weapon systems (LAWS): 82 countries in the United Nations Convention on Conventional Weapons (UN CCW) met again from April 9-13

Here is a brief recap of the meeting's progress:

Earlier this month, the UN CCW Group of Governmental Experts met in Geneva to discuss the future of lethal autonomous weapons systems. Throughout the week, states and civil society representatives discussed "meaningful human control" and whether they should just be concerned about "lethal" autonomous weapons, or all autonomous weapons generally. The group of nations that explicitly endorse the call to ban LAWS expanded to 26 (with China, Austria, Colombia, and Djibouti joining during the CCW meeting). Nearly every nation agreed that it is important to retain human control over autonomous weapons, despite disagreements surrounding the definition of "meaningful human control." However, five states explicitly rejected moving to negotiate new international law on fully autonomous weapons. Throughout the discussion, states focused on complying with International Humanitarian Law (IHL). Human Rights Watch argued that there already is precedent in international law and disarmament law for banning weapons without human control. Although states couldn't reach an agreement during the meeting, momentum is growing towards solidifying a framework for defining lethal autonomous weapons. The UN CCW is slated to resume discussions in August 2018, however, given the speed with which autonomous weaponry is advancing, many advocates worry that they are moving too slowly.

But before we get to that, here's a quick recap of everything that's happened in the last six months:

Since its release in November 2017, the video Slaughterbots has been seen approximately 60 million times and has been featured in hundreds of news articles around the world. The video coincided with the UN CCW Group of Governmental Experts' first meeting in Geneva to discuss a ban on lethal autonomous weapons, as well as the release of open letters from AI researchers in Australia, Canada, Belgium, and other countries urging their heads of state to support an international ban on lethal autonomous weapons.

Over the last two months, autonomous weapons regained the international spotlight. In March, after learning that the Korea Advanced Institute of Science and Technology (KAIST) planned to open an AI weapons lab in collaboration with a major arms company, AI researcher Toby Walsh led an academic boycott of the university. Over 50 of the world’s leading AI and robotics researchers from 30 countries joined the boycott, and in less than a week, KAIST agreed to "not conduct any research activities counter to human dignity including autonomous weapons lacking meaningful human control." The boycott was covered by CNN and The Guardian.

Additionally, over 3,100 Google employees, including dozens of senior engineers, signed a letter in early April protesting the company’s involvement in a Pentagon program called "Project Maven," which uses AI to analyze drone imaging. Employees worried that this technology could be repurposed to also operate drones or launch weapons. Citing their "Don't Be Evil" motto, the employees asked to cancel the project and not to become involved in the "business of war."

Lastly, feel free to write to us with feedback or updates about your own related work or events. – What can you do?...

According to materials news@futureoflife.org:
Newsletter, Future of Life Institute, April 2018.

back to table of contents
Download QR code for distribution: 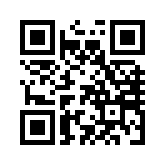